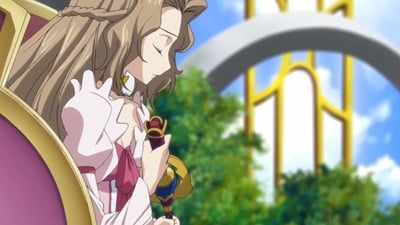 Schneizel unveils his plan to position the Damocles in such a way as to strike every warring nation in the world, thus enforcing peace through the threat of annihilation. Cornelia objects, but is gunned down. Lelouch declares Nunnally his enemy during their conversation, but in private has trouble with the thought of fighting her. With some harsh words from Suzaku and C.C.’s comfort, Lelouch comes to his senses and focuses on his original task. Nunnally, frustrated that she cannot fight or protect anyone, decides to shoulder the sin of launching F.L.E.I.J.A. herself. Schneizel, backed by the Black Knights and the remaining Knights of Rounds, clashes with Lelouch in the sky above Mount Fuji. Though Lelouch is able to destroy a fair portion of the Black Knights by detonating the sakuradite mines in Mount Fuji, the Damocles remains unassailable and its payload of F.L.E.I.J.A. warheads still looms over him. 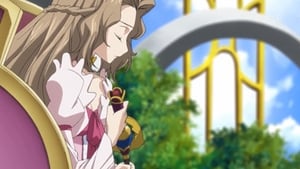